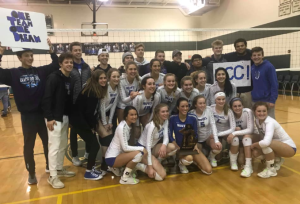 The volleyball team’s playoff run finally came to an end with a loss to Merrill in Regionals. Nouvel put up a good fight against Merrill but came up short losing all three sets. The volleyball team played all year with a majority of underclassmen putting them as underdogs. The team embraced the role as underdogs and went on to prove all the haters wrong with a successful season. The team will look to come back next year with a matured core of players and make another playoff run!

The Nouvel Volleyball team finished the season with a strong 7 – 1 record in their conference and ended as second overall in that conference. The volleyball team was still able to bring home some hardware, winning a district championship for the first time since 2010. Riley Cho, Isabelle Patel, and Catherine Buko were blessed enough to receive the 1st team all conference award.