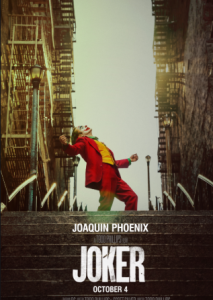 The new Joker movie starring Joaquin Phoenix provides a character named, Arthur Fleck, that is broken from being taunted by society and made a joke of himself. The Joker’s alter ego is simply a broken, lonely man that lives with his dying mother in a cheap apartment, and works as a clown for hire. The representation of Gotham City is possibly, if not one of the best cinematic versions of the dark, crime filled city. Phoenix also offers a great performance of the Joker himself. The development of the character takes some time but in the end it is worth it. He perfects the creepy and dark sides of the Joker, instead of just the loud and psychotic side. The crazy murderer still takes on the role we know and love but also take a dramatic spin on the character and it works very well. Joaquin Phoenix offers audiences a great performance of an iconic comic book villain and also give us a look at a 2020 Oscar winner.