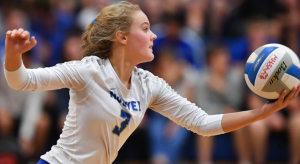 Varsity Volleyball has been killing it this season so far with a perfect TVC record of four wins. Last season, they had a very young team, with many talented juniors and sophomores. Those skilled underclassmen returned and over the summer, worked very hard training with hopes to improve upon their last season. Captain and Senior Riley Cho said “We are excited for the start of a new volleyball season, and hopeful for a great year to come under our new coach.”

The team is led by head coach, Jessica Fugate, who brings a new energy to the team, as well as captains: Riley Cho, Catherine Buko, and Maddi Copus. There have been some notable stats this year with Catherine Buko leading in aces, Isabelle Patel leading in kills, and Riley Cho with the most digs. Their next game is October 2nd at 7:00 vs. Millington, the first of three away match-ups.