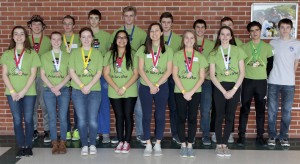 The Science Olympiad team is once again having a year of success keeping in line with our schools many recent great years with science Olympiad. There are many attributing factors to the teams success from the great coaching provided by Mr. Bradtke and all the great time and effort put into the competitions preparation from the dedicated team and group of students we have. We managed to catch up with a Key member of the team Sergio Molinar and get him to comment on his thoughts about the season and what the team looks forward to with States fast approaching. “At the beginning of the season it was a little rough because of the other events going on. After our first competition at Hazllet everyone relaxed a bit more because of the experience. That first competition also helped us see what were our strengths and weaknesses. Seeing other teams builds and their binders of notes helped us know what we could improve on. At first putting together notes and plans for builds took a lot of time. Then after a while you start to automatically know what needs to happen and when it has to be done by. You go through so many drafts of notes and builds that the competition seems to sneak up on you. The actual competitions go by slow but when it’s time for your event it goes by fast. This is the first year I’ve been in science Olympiad so I don’t know what to expect at the state meet. I do know that we will have a lot of tough competition at that meet.”. Be sure to wish the members of the team luck on their attempt to once again be victorious and win states, which will be on April 28th at MSU.