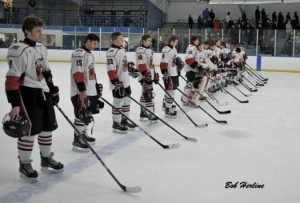 The FNV hockey team’s winning season came to an end this past Saturday in a hard fought game against Flint Powers Catholic. The final score was 8-1 with the lone goal coming from Brendan Maly of Freeland HS. They were the first FNV team to ever win a playoff game when they beat Mt. Pleasant 5-0. The FNV team’s final record was 18-9.

The top 3 leading scorers for the team were Brendan Maly with 56 points, Connor Dvorak with 38, and Peyton Essex with 36. Said Nouvel Senior JohnPaul Lefevre, “The season went well for the most part but did not end the way we wanted it to.”