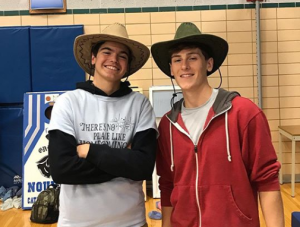 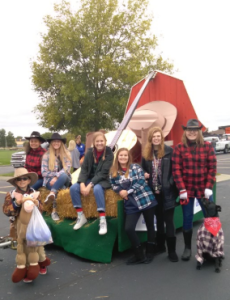 This year’s Homecoming theme was Music Genres. The week started off Monday with a dress-up theme of any music genre, with students wearing concert t-shirts and dressing as their favorite musical artist. On Tuesday students wore their comfies while lullabies played in between classes. Students also had the opportunity to hear from Trevor Pollo, a Right to Life speaker who trains students to defend a pro-life position.

Wednesday was a dress-up day and mass, with the Homecoming Court participating as servers. Thursday consisted of class color day and an indoor field day. The gym was filled with cornhole boards as students competed in a tournament. Senior Ryan Hunt and Junior Jack Kujawa defeated Juniors Katie Sullivan and Lauren Shaheen for the tittle.

On Friday, students enjoyed a pancake breakfast and received last year’s yearbooks from Mr. Rocha. Later in the morning, Homecoming Court presented their skits, dance, and the king Rocco Lopez-Gamboa was crowned. The parade followed later that afternoon, with the Seniors winning the float competition.

While the Panthers weren’t able to clinch a Homecoming victory against Millington, halftime festivities helped cap off a successful week with Tara Bruske crowned  queen. Finally, students enjoyed the Homecoming dance that Saturday in the NCC cafeteria and courtyard.