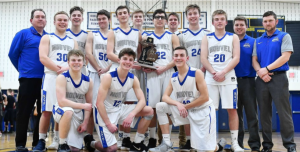 The Boys Basketball team has had great success this last week in their run for the District title. The team played Monday against Valley Lutheran and won on an amazing comeback led by Junior, TJ Ready. He led the team in scoring with 26 points with six of those being 3 pointers. The team came back from a 16 point deficit at halftime and won the game with a final score of 52-43. The team then played Wednesday against their rival, Reece, in a back and forth game ending with an amazing buzzer beater 3 point shot by TJ Ready. The boys then took on MLS Friday night, for the District Championship which they won 54-48. It was a back and forth game but the Panthers played a strong fourth quarter and brought home the trophy.