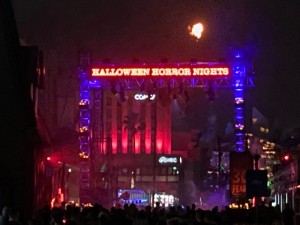 On Thursday, October 29th, three Nouvel students made the trek to Universal Studios, Orlando, Florida, to brave the 30th Halloween Horror Nights. These three Nouvel Students were, Dylan McRae, Jacob Johnson, and myself, we went through four different haunted houses, The Texas Chainsaw Massacre, The Bride of Frankenstein, Welcome to SCarey, and The Haunting Of Hill House(based off the Netflix series). The Favorite haunted house was The Haunting of Hill House, followed by The Texas Chainsaw Massacre, and The Bride of Frankenstein, and finally Welcome to SCarey. Welcome to SCarey was a good, haunted house, but it just did not live up to the standard of the others, the scares were not as good, and the set was average. The Bride of Frankenstein, was another great haunted house, but the other two were just so much better, the scares were good, and had a very good story as well. The Texas Chainsaw Massacre, the set was almost exactly like the original movie, and the scares were not as good as The Bride of Frankenstein or The Haunting of Hill House, simply because they were very predictable to where and when they would come due to the loud chainsaws. The Haunting Of Hill House was the flat out favorite, it had great scares, the set was amazing, and finally this house had the best scare by far, using disappearing wallpaper.

Although these Haunted Houses were awesome, and very scary, they could have been even better. The thing is that at these large scale highly popular events, they funnel a lot of people through, a worker even said they usually put through 30,000 people each haunted house. So, they have a long line of people making it easy to see where the scares were, and most of the actors had to stand behind plexiglass barriers, making it much easier to see where they were as well. Any of these houses would be absolutely terrifying if the plexiglass was not there, and people were sent through in slightly spaced out groups or individually. All of the houses were very good, but the scares did not stop at these haunted houses, they were also joined by five different scare zones, and two different shows.

Overall, these haunted houses, and the experience in general was awesome, I suggest that if you have the opportunity to attend this haunting experience, go for it, it does not disappoint.