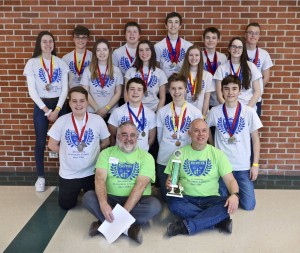 Nouvel’s Science Olympiad team recently participated in the regional competition, coming in second place and placing in 17 of 23 events! As a result, the team made it to states for the 9th year in a row. The competition will take place on April 27th , atMSU, and member David Schultz said, “I’m very excited to go compete this year!” As the students are preparing for their events, Mr. Bradtke said, “All the hard work since October really paid off, the team is really excited to go, particularly the freshman, who came through big time and earned numerous medals at the competition (in regionals).” In addition, some members can’t attend the April 27th competition, so the team is looking to recruit new people that want to join the team and go to the state competition. See Mr. Bradtke ASAP if you are interested in joining the team.