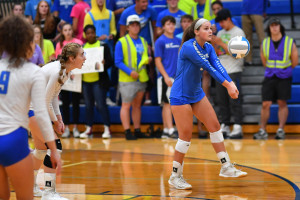 The Varsity Volleyball team is starting off strong so far this season. On Monday, 8/30, they played against Ogemaw Heights and won best of 3 sets. On Wednesday, 9/1, they played Hemlock and won best of 3 sets. Their first home game was against MLS and took the victory by 3 sets. Their most recent game was against Bullet Creek and lost 1-3. They also played in 2 tournaments against Swan Valley and Bay City Western and took second in both. Mackenzie Brown, senior and middle hitter says,  ‘’I am looking forward to seeing how far we can get in the season and how close we will all become with each other! I think we could work on communicating on the court more but, I think if we all put our minds to it we all could get really far this season.’’ This Wednesday 9/22 they have a home game against Ithaca and are hoping to take yet another victory.