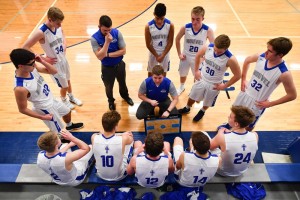 The boys varsity basketball team has been on a role all throughout the month of January. There past three games they have went 3-0 against some very tough competition. They started off with a win against a very good Garber team with an end score of 53-46. The Panthers then went out to Beal City on a weekday and over powered their squad as well. Our boys finished off the month of January at home against a one loss Atherton team before they came to Nouvel. Then the Panthers took them out 69-54. They hope to continue their streak through the month of February where they start off at Reese on February 6th. Senior Captain Tate Hausbeck stated, “Yeah, we’ve really been on our groove lately and have picked up the pace throughout this whole month.” The Panthers have a record of 7-5 currently and are looking good heading into the post season which comes at the beginning of March. Come out to support your Nouvel Boys Basketball team as they work towards going to the regional final game once again and hoping to win it this season.