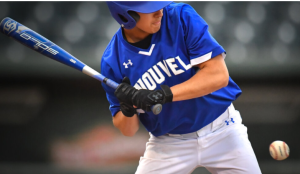 With the team looking to build momentum headed into the playoffs next week, the Panthers took on the Bay City All Saints Cougars in a doubleheader on Tuesday night. Going into the game, the Cougars were ranked number 5 in Division 4. In the first game the Cougars defeated the Panthers 10-1. Nouvel sophomore Hayden Simerson recorded the game’s only RBI with junior Sammy Bartels coming home for the lone run. The second game was a much different story with freshman southpaw Luke McConnell on the mound. McConnell pitched brilliantly allowing only one run all game, but headed into the final inning the Panthers were still down 1-0. With two outs and no runners on base in the top 7th, things looked bleak for the Panthers. Junior Jeamy Pascual started the two out rally with a single, followed by singles from juniors Dylan Kingsbury and Sammy Bartels. All of sudden with the bases loaded, senior Jack Kujawa stepped the plate. With one swing Kujawa changed the game, coming through clutch with a two out double that scored all 3 runs. The Panthers held on in the bottom of the 7th to come away with a huge 3-1 victory. The Panthers will wrap up their regular season against a very talented Frankenmuth team featuring Michigan commit Drew Titsworth and FNV Griffin Tyler McKinstry. Following the Frankenmuth game, the Panthers will play in districts next week with their first game against MLS @ MLS next Tuesday at 4:00 P.M. If you can, come out and support our team! Every fan matters. From all 5 of us still here at Nouvel Panther Print, good luck and go Panthers!