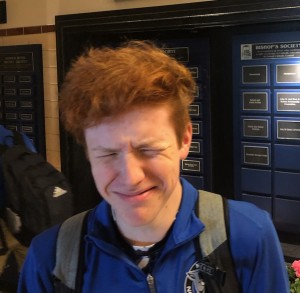 Joshua Flemming is the Ginger of The Month for February! We would like to congratulate him on winning this award. Josh works hard in school and at his job working for Express. Josh is a pro at almost everything he attempts, except when dealing with his crippling caffeine addiction. If you see Josh, chances are he’s trying to sell you a Bang for 3 dollars. Over-priced, I know.

One of Josh’s favorite hobbies is to play Fortnite. Josh spends endless amount of hours playing this game and has greatly increased his skill since first playing the game. Many are jealous of his talent, but don’t be too jealous.  Josh still has an android in 2020, how disturbing!

“Where we droppin’ boys” is something that Josh lives by, always looking for a new adventure. Josh lives a simp(le) life, showing extensive effort at being with his girlfriend, and not hanging with the boys.

Congratulations at winning this month Josh! See you next month!