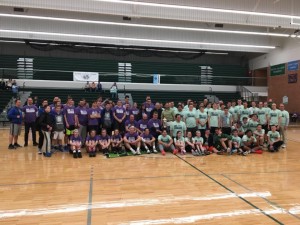 Hoops for Homeless is an annual basketball game made up of students and alumni from Nouvel Catholic Central and Bay City All Saints coming together to raise money for the homeless. The “Catfight” has become a tradition, this being the 9th year. This years game had a great turnout, the cause raised approximately $7872. Aside from the money, the basketball game also went very well, with the purple team(Nouvel) beating the pale blue team(All Saints), with a buzzer beater from Kenny Kujawa, a Nouvel junior. The ending score of the game was 174-173, the high scoring game resulted not only from the basketball game, but from other events, that went on during the game, that help to raise one’s score. Hoops for Homeless also have a prize wheel, 50-50 raffle tickets, mini basketball, and other events, that greatly helped to raise the amount of money this year. Congratulations to all those who participated in this year’s game.